Wonderful weekend to show at a UKC Show. December 16-17, 2017 put on by Desert Southwest Shetland Sheepdog Club, In Phonix, AZ.

Mapleleaf I Have One Question "Missy" was awarded Best Female at 4 shows.

She is now UKC CH Mapleleaf I Have One Question "Missy". 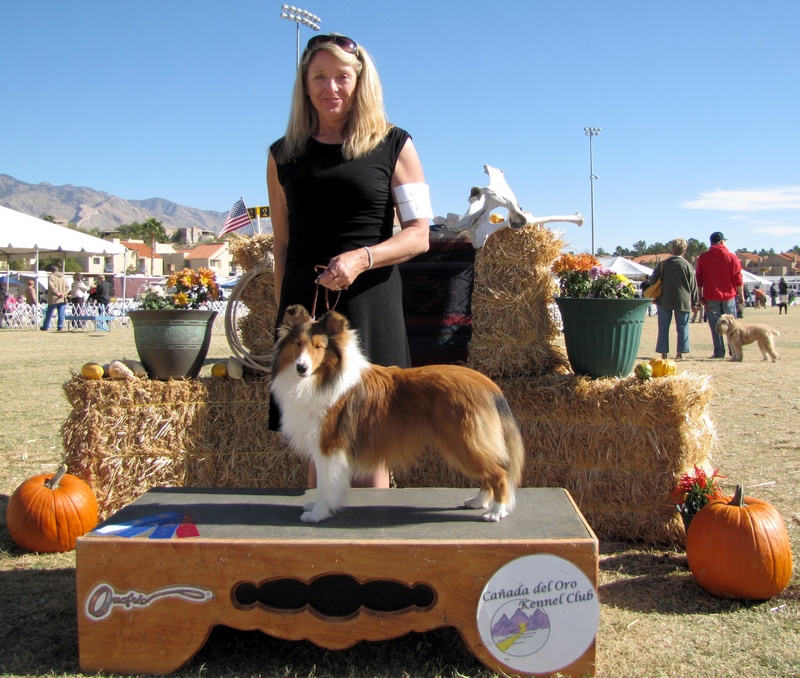 They came home with 3 first and 1 second showing in 9-12 month puppy class.

The following information below is about Allie and her Daughter Halo.

at the Nathan Hale Obedience Club show with a score of 99, and a three

way tie for 2nd place, speedier dogs gave her the 4th place out of 15 dogs.

Halo will be simmering through the winter and trying for her new title in St.

October 26, 2013- Allie earned the first leg of her CD title today at the Queensboro Kennel Club

show. She gave an enthusiastic performance, though on her heel off leash was

two more to go Thanks Debbie for switching days with me!!

September 22, 2013- My baby Halo, won her first ribbon today at the WMSSC match. She

scored a 91 and got second place in Rally Novice. I entered her mommy,

Allie, in Obedience Novice where she couldn't possibly stay seated for the

10 more seconds, before she... collapsed in a down...naughty girl. She did

qualify in pre-novice. Though she is flawless training in the yard, I now

know what we need to work on.

Sable Boy. They are sired by the handsome Rosmoor Armageddon (Ch Westar's

Thank you Barbara for allowing Aaron to sire this litter. I think my "Halo" might

February 7, 2013- Allie was invited to compete at the inaugural AKC Rally® National

not going, but it's awesome that she is eligible!!

December 17, 2012-Allie earned her Rally Novice title in 3 shows with scores in the mid to high

90s. And her Beginner Novice title in 3 shows plus a buffer with score

She is a fun loving girl and captivated judges with her joy and zest for life!

communication open, and working on agility were she will excel once we get

her "shot out of a cannon" recall, circling me once then assuming her sit it front

position. This performance scored a 184.5 and a "very cute" from the judge

a second place. I'm so proud of her!!! ? at Providence Kennel Club.

show with a score of 96 and a tie for 2nd place. We had to settle for 3rd as the

other 96er was faster. We now are going to work on off leash for a fall return to

the ring in Advanced Rally and Beginner Novice. We will also be working on

Club show. She scored a 96; winning the tie for fourth place with the faster

She scored a 97 and got a 1st place....sure there was only one other dog in the

These pictures are protected do not copy write with out permission. 2020